On September 22, 1913, the first story of Tango appears in the newspaper Crítica. The path of tanguero love and rescue was inaugurated by the mysterious Old Tanguero. 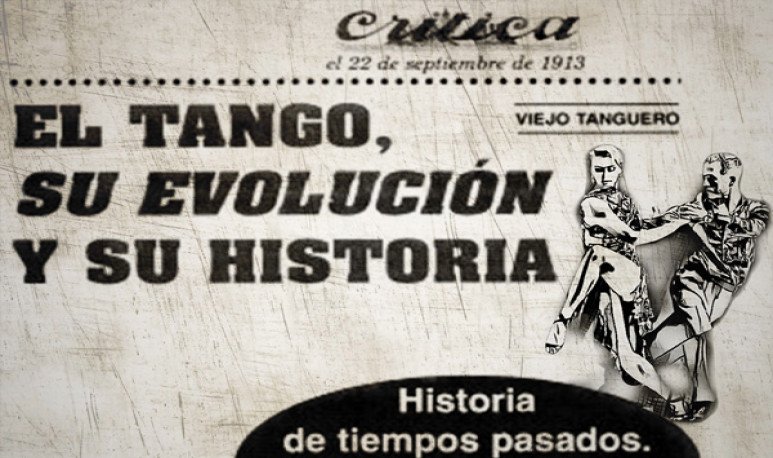 The revolution of the newspaper  Crítica  de  Natalio Botana  would cover various aspects that exceed the information company. National culture would never be the same since those flammable headlines and articles that were printed from the modern building of avenue de Mayo 1333 -inaugurated in 1927, today police headquarters - Literature and arts coexist in a popular newspaper that “knew how to awaken cholera, amazement or admiration of the whole society: the only attitude he did not tolerate was indifference”, in the words of Sylvia Saitta. A fundamental actor in politics and society of his time, he supported the coup against  President Yrigoyen , and held a plural section to the workers' world; handed columns and supplements to  Martín Fierro 's young avant-garde and imposing exacerbated sensationalism which questioned the institutionality on the verge of contemporary “let everyone go” In the hurricane that was  Critique , which sold a million copies with the spectacular coverage of the Nazi invasion of Poland, Tango was not indifferent in its ideology and language. Even more. It was in his DNA in the police chronicles of Yacaré, the lunfardo poet  Felipe Fernández , or in the deeply Buenos Aires articles of the poet  Raúl González Tuñón, “in our cosmopolis there is no spirit that represents us anymore faithfully that tango”, he quotes, and writes with that mistongo pulse from the vibrant chronicle of the fall of the tram in La Boca, in 1930, to the days of mourning for the death of  Carlos Gardel . On the sidelines,  Morocho de la Abasto  owes much of his career, and his subsequent eternal glory, to the newspaper of  Botana.

The aforementioned  Yacaré  writes profusely about tango and lunfardo from 1915 in “Grammar del chamuyo rantifuso”, a genre that returned by boat and telegraph legitimized in Paris, and gloomed in aristocratic Argentine salons. It was missing that the new middle classes, mostly immigrants and creoles of businesses and public employees, entered the seductive, and murky world of the outskirts, conventillos, cabaret and brothels, in the key of myth. That same year  Botana  commissioned  José Antonio Saldías  , his police journalist as a disciple of  Nemesio Trejo  , to begin with a fixed section called “New Dictionary of the Lunfard. Voices and expression of the porteño district” in the company of  José Francisco Palermo . For the Uruguayan editor,  Saldías  was a young promise that uncovered with a style that fictionalized arabaleramente quarteramientos and shooting and, at the same time, a promise of the  Argentine theatre  that would triumph that same season with “  Nights de garufa  ” under the tanguera wings. That is why it is plausible that the author of “El tango, its evolution, its history. Stories from past times. Who implanted it”, the enigmatic  Old Tanguero, be Saldías , as is the scholar of the Academy Porteña del Lunfardo,  José Gobello . In addition,  Saldías  published in  Crítica  sueltos and poems with the aroma of zaguanes, and quebradas, with the alias Rubén Fostras. Path that lead us to this journalist and playwright as possibly  the first documented historian of the Argentine Tango.

“No one would have thought of those embryonic times of cosmopolitanism, that through time and by reflection action of the progressive movement, could resurface with violent impetus, that exotic dance that people of color once devised, replacing the devilated candombe of the legendary africans”, started the  Old Tanguero/Saldías  , locating the  origins  of the sentiment danced Buenos Aires on the drums of the South, and continued in 1913 to liquidate futures pseudohistorians who deny his  Afro-Argentinian origins , “to the black condemnation in which he lived for years for undeniable social sentence... has preceded him by an act of gentle amnesty and kind vindicatory exequatur... now that his name was imposed in the regal halls of civilized nations, their fellow citizens give him a letter of honesty for the triumph obtained and receive him with the trumpets of fame,” says the journalist with an ironic leave. Throughout the document retrieved by Gobello describes the persecution, and closures, of the piringundines and academies, of the  neighborhood of the black “Mondongo”,  near the current Lezama Park, and once adopted by the compadritos, malevos and poor creollos, the root in Barracas, San Cristóbal, La Boca and San Telmo. And list the first renowned dancers,  Carmen Gómez, La Parda Refucilo, Pepa la Chata, La Mondonguito and María La Vasca . Note that he names milongueras marking the first firulets, not males as they usually appear in the canonical sepia photographs. As for music,  Viejo Tanguero/Saldías  refers to the  Academy of Independence and Pozos  , “the name given for the modernization of tango” and to avoid police raids, he points out, and names the  black Casimiro and the mulatto Sinforoso  that led to tango to his greatest “heyday” in the 1870s —and imaginarily inaugurates a nostalgic and traditionalist look of the genre long before the  Guardia Vieja.

Saldías  (1891-1946) should be placed in the context of the modern professionalization of Argentine  writers and journalists. Wayward son of historian  Adolfo Saldias,  leaves military studies to live the bohemia of the Centennial with novels,  Charles de Soussens and Antonio Monteavaro  , the closest Buenos Aires had to the Parisian bohemians of the Moulin Rouge, or others who would make up the cultural machinery,  Alberto Gerchunoff and Ricardo Rojas , among them. He lived a youth in “pieces of houses of suburb” and “tramoyas with malandras and immigrants” In the case of this journalist, started in  La Razón , it is in  the nascent national theater where he gets notoriety, a longing for several roadmates who failed such as  Roberto Payró or Manuel Gálvez . Good reviews for the aforementioned  “Night of Garufa ” precede the successful “  The Distinguished Citizen ”, written in collaboration with  Raúl Casariego , and which exceeded one hundred consecutive performances. Part of the rapid acceptance in the plays was “a direct theater for the public,” in the words of  Saldías himself, which did not seek to show the mismatch between the literate culture, and the popular audience of the Podestá, but instead put them in dialogue without cracks.  Saldias  was a man who could interview Mario Carlés from the fascist Patriotic League in the same newspaper one morning, and in the afternoon, anarchist Alberto Ghiraldo. And go have a coffee with you both to La Brasileil. Director of the Institute for Theatre Studies and the Theatre Museum, a founding member and defender of the General Society of Authors of Argentina (Argentores), is also remembered as the author of tangos. One of them, the classic “Perdón viejita” with music by  Osvaldo Fresedo , was recorded by his great friend,  Carlos Gardel.  His play  “De Gabino a Gardel”,  shared with  Ivo Pelay  , was premiered at the Teatro Nacional with the  Cantor of Buenos Aires  on stage in  1933.

“At last the moment came,” he says in his memoirs this eximio costumbrista of the porteños of the first half last century, and he adds citing the actors and actresses who starred in his first dramaturgy, today legends of the Argentine show, “In the midst of absolute silence the curtain rose and the first painting started. I began by noting with satisfaction that where I had marked a situation with parliaments of circumstances, people laughed frankly, to silence themselves immediately and follow the dramatic incidents attentively... The second picture liked it very much; the two canillitas embodied in  Olinda Bozan and Livia Zapata ... and the final draw came, that of “ Hansen.” Panchito —Aranaz,  a Spanish actor -, to give the painting more reality, had hired a typical orchestra, whose bandoneon was played by a fourteen-year-old boy called the  Pibe de la Paternal  . Today in the world of “broadcastings” it is called  Osvaldo Fresedo . It was the first time that a typical one was on stage and that was also counted as an incentive... the truth was that  “Noche de garufa ”, premiered in December 1913, was a success”, concludes  Saldías on the  debut of a Típica Tango Orchestra in the national theatre.

And the Italians went out to heel

“Despite the banned dance houses, some of them managed to settle in the dark neighborhood of Corrientes, which, as is known, was the focus of the antros de vicios. They adopted the system of the organite covered with the mattress...”, advances in the chronicle  Viejo Tanguero/Saldías  in 1880, “ La Stella di Roma,  in Corrientes and Uruguay, known for the dance of Pepín, was the first to settle and the one that had the greatest rise due to the attraction that exertedIacute; to the Sisters Balbina, Rosa and Maria. Later the  Scudo of Italy emerged... the House of Provin, the Bridgebridgeand others saw ephemeral life, because after a certain time the police concluded with them... in this neighborhood tango suffered great innovations changing its figures... also its elasticity and contoneos… Performed by mostly Italian girls, they did not adapt to the movement printed by the creoles of strain and it was then that it was given the name of Tango Liso... the skinny Saul... -and- Mariano the dancer, regular assistant to the  Scudo of Italy , with a Paulina who had upset all the clientele... made a wheel in the courtyard -the other tango lovers - to admire and applaud the difficult figures they invented... -but- after a reign of two years disappeared -the tango - and with them the dancers and dancers, many of them who spread through La Plata and villages of the province, where the Academies made an irruption” says the journalist from the times before the  Park Revolution  and the fall of  President Juarez Oh, Celman.  And he traces a tango that will have an Argentine destination in the democratic aurora. In this parent article written by  Saldías  on the night before an aristocratic dance at the Palace Theatre in 1913, those who organized “the good children” of Baron De Marchi, celebrated the “old tango that with shameful stigma came to national life” for stay.