Rural bandits, then urban, have a long national history. From the sorceress Macagua to Pepita la Pistolera, all of them are today the object of popular devotion. 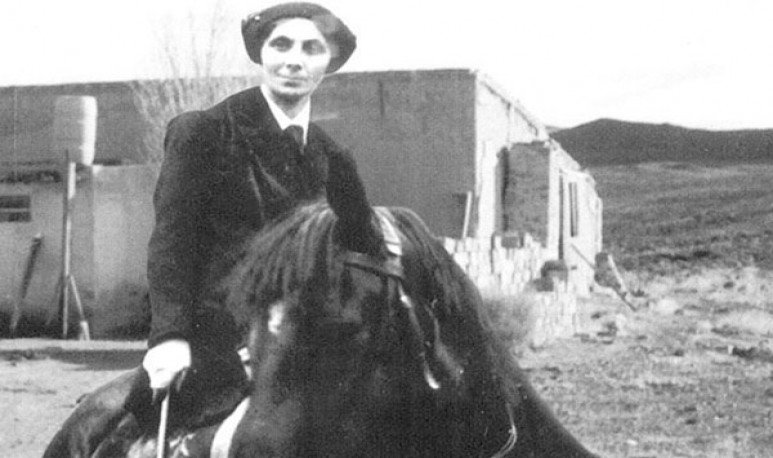 At the beginning of the Colony it was clear that there was no gold or silver in the pampas and that the precious stones had another color. Blood red.   Cattle was the precious stone of Plata and at the end of the 18th century the four-year period began, the first systematic Argentine crime - in addition to smuggling   . In these bands, many led by rival estanciers and wealthy traders, prototypes of the aristocratic patota, resorted to wandering gauchaje regardless of sex.   Many Creole women, Chinese women, had the baptism of fire in the uncontrolled abigeato, sometimes for reasons of strength, sometimes because of hunger.   Hence it is not so difficult to explain that they have been heroines in the wars of Independence, right-handed knife and guerrilla tactics.   There Martina Chapanay, crossbody bag from San Juan, and chasqui de San Martín.   Separated by a thin line, Indian women also participated in armed resistance to the advancement of the national state. It was not uncommon for the surprise attack by an Argentine army patrol in the south of Buenos Aires or Rio Negro, in mid-1860, from inside the awnings to respond to bullets.   With the proviso that some women in these Aboriginal communities were respected as healers or sorcerers. One of them was Macagua, or Antonia Gueche.

“In January 1908, in the house of Antonio - it was Antonia, who was dressed as a male - Gueche (alias) Macagua, witnessed the murder of two Turks” -begins the statement of one of the accused, supposedly from the Macagua gang, and who were mostly Chilean Araucans Indians who went and came from the border as they did centenarially- “Antonio was about to buy a blanket... at the agreed sign they paid a shot to a Turk... while they immediately threw themselves at the other...   once in the land Gueche with a iron broke one of the Turks's skull and the other hit with a thick stick on his head   ... gave Gueche warned to gather firewood... to burn the victims...   They pulled out his heart and testicles... and roasted a piece of human flesh...   the declarant was invited to eat, trying a bite, which he threw because it seemed very salty and dismissed a lot of water” commissioner José Torino, in charge of the regional Cuy, who led an official investigation into the pressure of Syrian immigrants to the ambassador French, and the Argentine government. It was the homeless times of the Rio Negro Territory. And the “Cannibals of Patagonia” came to the tops of the scary Buenos Aires, which increased their fear when they learned they were using bones for amulets and weapons.

“I'm going to take them out and save 'cause it's good to have courage to kill Turks and Christians,” it seems Macagua said   to a terrified officer, almost 70 immigrants had already disappeared on the southern routes, and with a sinister echo of Tandil's founding massacre of foreigners in 1872 - and that the Rural Society at the time took care of concealing by its president Eduardo Olivera and his famous speech “quadrerismo is more important that the death of a couple of foreigners” By the way, it was said that Macagua in las Lagunitas, still a place lost in the empty Patagonian plateau, had a thousand cows, 12,000 sheep and 200 mares. But what most caught the attention of the villagers was the ferocity of Macagua, especially “gringos y milicos”, and they said that it passed to the slurry anyone with an admirable skill and “sucked the blood to scare away the gualicho” Healer of the area, Antonia, or Antonio, always dressed Chiripá, a soldier of the National Army in 1897 (sic) and who lived with two women, was highly appreciated among the indigenous and humble peasants. They officiated their escape from the police raid, but also helped the superstition of the commissioner and a general of the Nation who provided their cooperation,   No one wanted to make her angry at the lady who wore amulet stuffed testicles.   She disappeared in the fog of the roads although she is a popular saint in large areas of Río Negro and La Pampa.

From English to La Holster

Quaterism according to the press was the main problem of estanciers and landowners in all latitudes, when they were not yet provinces in the majority, and the presence of law enforcement was very scarce. Although statistics between 1880 and 1909 show in Buenos Aires the theft of only 44,000 heads of cows and 286,000 sheep, nothing compared to the millions of bovine heads and sheep grazing in the millions of hectares in the hands of few,   repressive measures are intensified by persecuting rural bandits   -and the gauchos who could be complicit by a simple resolution of the fearsome justices of the peace, a position empondered in Rosism and who lived in the campaign well into the twentieth century. It was the times of “death on the run” executed by police or military parties, i.e. indiscriminate shooting. That was the apparent end on March 31, 1915 of Elena Greenhill, or La Inglesa, the nightmare of the landowners of Patagonia, especially in Chubut and Rio Negro.

Elena was described as a Nordic beauty, expert shooter, and that with a very civilized “these animals are my property” she snatched with the cattle of the neighbors towards her farm in Monón-Niló   . Tired neighbors in 1909 request police intervention, which goes with Commissioner Domingo Caligaris and a large heavily armed departure. They knew about his fame of shooting before asking and how mysteriously he widowed a first husband in General Roca. What they didn't foresee was that at the cry of “Nobody moves” a rain of bullets departed from the ranch, even fired a weasel that happened to take mate and buy some goods from Syrians. They were reduced, abducted and harassed by Elena's minions and her partner, Martín Coria. The curiosity is that Coria denounced the departure for “abuse of authority” to the commissioner of the Macagua case, Torino, and was hired in the mission that arrested the “Cannibales of Patagonia” In the months he was denounced for stealing the estate that had been left without protection. in Lagunita, narrow Virginia Huare.   The quadrerism was and was (is it?) a vicious circle between landowners, politicians, police and rural bandits.

A few years later La Inglesa returns to Chubut for a land owed and is surprised in a forgotten stream, some say revenge for the humiliation of 1909”   The old villagers remember that the shoulder bag was washing their clothes, kneeling by the water and had left their guns on the ground. There was no shooting: Valencian shot him in the back   ” said the neighbors interviewed by Francisco Juárez. The Valencian referred to is Felix, a dark policeman who extorted survivors of Patagonia Rebelde, was a recommended officer in Formosa, Rio Negro and Salta, and ended up as a rich producer and justice of the peace in Lago Argentino.   La Inglesa rests in the British Cemetery of Buenos Aires and in the Angostura de Jackal a popular cross is decorated every March.

“The gunman is bold, of great recklessness and fast in action” described the officer Manuel Barrés in “The underworld and its secrets” (1934) A good business card by Margarita Di Tullio, or Pepita la Pistolera.

The social renegade as a necessity?

“At seven years old. He stole everything the Catholics giles left him from the grotto of Lourdes. When my old lady started to suspect because she was too lucky, she walked with her arm, threw the trouble on the sidewalk and say, “Oops, mommy, look, what is this? “Jocosa Margarita commented to Cristián Alarcón, in a tremendous report published in the newspaper Página/12 in 1997. She had been exempted from charges in the murder of José Luis Cabezas, and the serial murders of prostitutes on the routes of Mar del Plata.   At that time they wanted to use it as a scapegoat who was known as Pepita la Pistolera, the queen of the bottom of 12 de Octubre Street.   Its cabaret were the most famous of La Feliz, meeting point for sailors, hampons and a diverse humanity that included a dwarf, transvestites selling cakes and a Korean tango singer. On the path of the Chapanay and the English, women without masters, Pepita organized at 18 years of age a gang of automotor thieves, “I didn't want to be hired, subdued. In my way, but it was always free.” A freedom, a life, who defended shooting along with his family in a reckoning in 1985 by killing three aggressors, and his nickname, the Holster, was born,”   I hate the person who kills. We're human. If you argue with me, I will give you a defense, I will never shoot you for treason” Never like the Valencian police.

Pepita was still venerated in the area of the marplatense port, who died of a stroke at 61 years in 2009. And she misses her with her cabarets closed a couple of years ago. ”   Behind the bar, next to a bottle of champagne and a blonde wig, was a giant photo of Margarita — lit with a light — with the legend “Nuestra Nugita"”,   in the memory of a habitue of Neissis for Rodolfo Palacios, “That painting was a kind of sanctuary: customers looked at him with nostalgia and prostitutes paid tribute to him with a glass in their hand. On another wall there was a poster with a picture of Pepita with a shotgun. The customers and friends of the madama wrote phrases in her tribute. “Marga, let the night not die with you” And they say that the pride of Pepita born in those below is missed, and of women who do not want to submit to the powerful or men, “or to the fate of a country trampled and full of slaves”   Bairoletto and Mate Sewn would be happy with a daughter they didn't know, Pepita.

“In a poorly constituted society, or constituted with discontent, the antisocial element represents a large part of the repressed feelings of the same society: the latent society,” he analyzed with the rope around his neck Ezequiel Martínez de Estrada in 1933, in the seminal “Radiography of the Pampa”, & ldquo;   Hence the heroic and sympathetic character that in some cases covers the evil of the handsome - we add, rural bandit, gunman, squirt- is a way to take revenge by the people, by delegation in that unhappy.   With its courage and desafuero, with its silent step, the honest mass of neighbors regain the sense of their strength and their protest, suffocated, against order and justice”